Skip to content
An older and wiser friend, who shall remain unnamed, once told me that the only way to get any new idea past an uncooperative man is to make him think it was his idea to begin with. I was constantly reminded of her sage advice during my favourite parts of Saand ki Aankh, the awe-inspiring story of Chandro and Prakashi Tomar – two (literally) firebrand dadis from rural UP who learnt range shooting at the age of 60 and have won hundreds of medals in the sport since.
Wedded into a conservative family of their village to the two younger brothers of the patriarch Sarpanch, young Chandro and Prakashi decide early on to be friends rather than foes. This is possibly where their fate to lead an extraordinary life gets sealed. In a relationship traditionally marred with competition and jealousy, the two decide to choose the path of compassion and friendship instead. And what a friendship it is! Chandro and Prakashi are true soulmates, far more so than the men in their lives. In rural India, where many men are known to do little more than smoke, drink and generally while away their time, their “housewives” run the household, do everyday chores, manage the family, as well as toil in the fields. Yet, somehow, somewhere along the line, society decided to treat the men as superior to the women. This assumption remains unchanged over the youth of Chandro and Prakashi, even as they are well aware of the fact that they are smarter, stronger and more capable than the men in their lives. They let the men walk over their little dreams and aspirations without protest, accepting this as the way of the world. Meanwhile, even in the backdrop of forced vasectomies of the Emergency era, their families grow to a few dozen children, and life goes on with no sign of being anything more than ordinary.
Things take a turn when, somewhere in their sixties, Chandro and Prakashi decide that their daughter and granddaughter respectively should get a chance to avoid their fate. An opportunity presents itself as a makeshift shooting range in the village opens and training is offered with a chance to play at district and state levels and score a government job. In the process of taking their children to the range, the two discover that they are naturals at the sport themselves. Years of manual labour in the fields has made their hands strong and steady, which makes them exceptional markswomen.
The movie is the story of how, through hilarious manoeuvres, manipulations, and made-up dreams where the Gods speak to them, the dadis make the patriarchs think that letting the womenfolk travel to faraway places outside the bounds of the village – ostensibly for religious pursuits – is their idea to begin with. The telltale sign of the dadis tying a knot in their dupattas marks a scheme hatching in their minds to overcome hurdle after hurdle. This never fails to bring a smile to your face, even as you realize the sad reality that all this scheming and planning should not be necessary for any human being for the basic right to pursue their dreams and talents. But as the mere freedom to step out of the house to practice shooting eludes the women, they remain undeterred and keep finding ingenious ways out of tight corners.
In the process, the dadis also get to see a world beyond the confines of their village – a world where husbands are capable of supporting their wives and being genuinely proud of their achievements, a world where talent and merit are honoured above appearances, and an amazing world full of sunglasses and disco balls. Proving, once again, that new experiences are the best education. As a result of this newfound education, the dadis come to expect and demand a higher standard of the menfolk back home, and just when you think all hope is lost, watch for the knots in their dupattas! 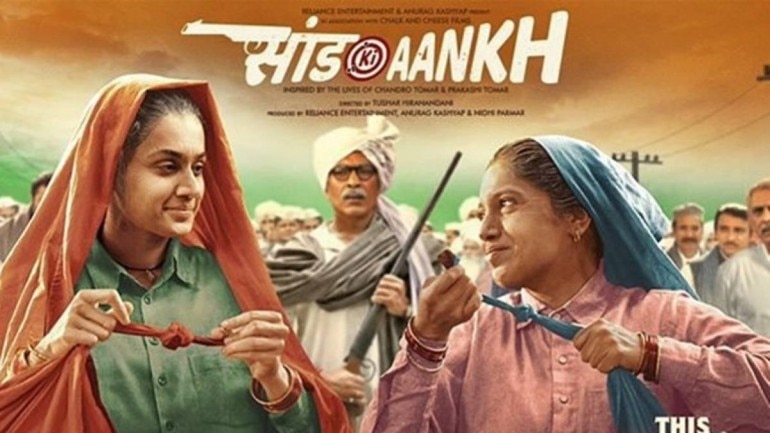 It is hard not to compare Saand Ki Aankh with Dangal. Both are stories of the making of great sportswomen from the Haryanvi-speaking rural hinterland of India. Both are stories of women overcoming patriarchy and misogyny of the societies they come from to leave a mark and make the nation proud in the arena of sports. However, prosthetic makeup budget and the-gloriousness-that-is-Aamir-Khan notwithstanding, to me Saand Ki Aankh stood out in one crucial detail. This is a story of women succeeding with the support of other women. The sisterhood – of not just the Tomar dadis – but the dozens of women in their family who keep their secret, is something that touches a chord that no tale of male-led female emancipation can match. The self-made story of women leading change in their own lives, and to improve the lot of the young girls that come after them is the story which will inspire women to take charge instead of waiting around for a knight in shining armour to come to their rescue. To me, that is the story which will heal the world.
PS: Dare I add, after hijacking many a women-centric movie by casting himself as the man who ‘led’ or ‘allowed’ or ‘inspired’ the women to succeed, a certain khiladi with a saviour complex plays his most useful role so far in this film. Do watch out for it. (I bet he thinks it was his idea to begin with.)